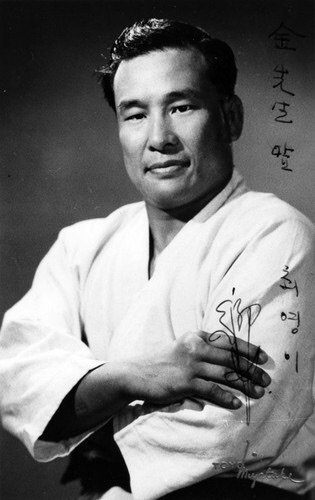 Kyokushin karate is founded in 1964 by Oyama Masutatsu（大山倍達） which is style of stand-up, full contact karate. After formally establishing the Kyokushinkaikan in 1964, Oyama directed the organization through a period of expansion. Oyama sent instructors to many countries such as the Netherlands, Australia, the United States, Great Britain, Canada and Brazil to spread Kyokushin in the same way. In 1969, Oyama staged The First All-Japan Full Contact Karate Open Championships and Terutomo Yamazaki became the first champion. All-Japan Championships have been held at every year. In 1975, The First World Full Contact Karate Open Championships were held in Tokyo. World Championships have been held at four-yearly intervals since.

After Mas Oyama's death, the International Karate Organization (IKO) split into two groups. One group led by Shokei Matsui became known as IKO-1, and a second group led by Yukio Nishida and Sanpei became was known as IKO-2.

In 1995 any new Kyokushin organization that claimed the name IKO, Kyokushinkaikan, were referred to by Kyokushin practitioners by numbers, such as IKO-1, IKO-2 etc. Due to this break up, many attempted to establish their own leadership.

In essence Kyokushinkai, roughly translated, means "Ultimate Truth". This concept has less to do with the Western meaning of truth; rather it is more in keeping with the bushido concept of discovering the nature of one's true character when tried. One of the goals of kyokushin is to strengthen and improve character by challenging one's self through rigorous training.

Any reproduction without permission is prohibited.